You can catalog a NoSQL database in Alation using the Virtual Data Source (VDS) functionality and the NoSQL Apis.

Alation does not provide automated metadata extraction (MDE) for virtual data sources, and you will need to use the API to upload and maintain the metadata.

The structure of the uploaded metadata must meet several requirements. To catalog your NoSQL data source:

NoSQL support is behind the feature flag:

Your Alation Admin will need SSH access to your Alation instance (on premise) or submit an Alation Support ticket (Alation Cloud) to enable feature flags.

A Generic NoSQL virtual data source (VDS) in Alation is modeled as a set of top-level folders, each having at least one collection. Each collection can have one or multiple schemas. The schemas in collections are used to describe the structure of the documents in your noSQL database: 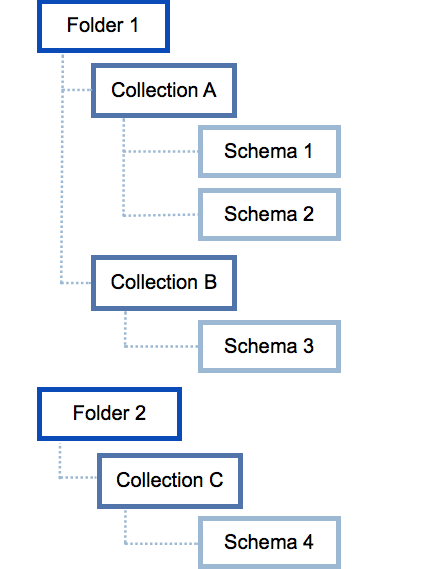 Before you can upload any metadata, you need to create your VDS in Alation. See Adding a NoSQL Virtual Data Source for steps. After that, use the NoSQL API to upload the metadata.

To be uploaded using the API, the metadata for your NoSQL virtual data source must be represented as a single JSON object that includes such objects as folders, collections, and schemata, with the actual schemas wrapped in the schemata keys and represented in either JSON or Avro format.

This JSON object will be passed in the body of the API POST call.

JSON schemas do not need to be written by hand. Your database management platform may include an export tool to use to retrieve the database collections in JSON format. You can use this export tool, if available, to export all the collections you want to include in the catalog and then use a JSON schema generator to infer the schemas from.

One JSON schema generator you can use is Genson .

After you have the JSON schemas, fill the JSON object structure required by the API with the JSON schemas of the collections which you want to upload to Alation. Schemas should be included in the definition key of the schemata key.

name must be the first attribute in any JSON sub-object.
If you want to reference an object (using $ref), then make sure the definitions property for this object appears in the JSON code before you use this $ref.

You can use this example for steps to create the JSON object for loading metadata into a MongoDB virtual data source (VDS):

Updated about 1 year ago